Home » Pasir Ris 8 Worth Buying? (A Look Back at Integrated Projects)

Pasir Ris 8 Worth Buying? (A Look Back at Integrated Projects)

An integrated project, Pasir Ris 8 is the Transformation the Easternmost MRT Station of the East-West line has been waiting for.

For those familiar with the West…Back when Boon Lay was the Westernmost MRT station of the East-West line, some would say that The Centris was the integrated project that transformed the area.

Back then when it launched in 2006, it was truly 1 of the first integrated projects in Singapore.

In this article, in considering whether Pasir Ris 8 is worth buying, I think it makes the most sense to compare with the performance of past integrated projects.

Normally integrated projects can’t really be compared with other nearby projects unless there is strong reason to. (Check out The Woodleigh Residences: Is it worth buying?)

There is most definitely a premium to pay for the convenience and rarity of an integrated project.

However, from an investment standpoint, does the initial premium translate into future selling profits?

Or are you better off buying an older resale in the area and hoping it appreciates to ‘close the gap’ with the integrated project?

Along with my observations, I am sure you will learn plenty about the growth potential of Integrated Projects in this article.

I pick 5 integrated developments to look at in this article.

These are chosen based on comparability to Pasir Ris 8.

Before we head into the details of each integrated project, check out the video below which I shot with Developer Appointed Real Estate Salesperson Colin Ng from PropNex to learn why you really need to watch out for Pasir Ris as an up-and-coming area.

Did you know that The Centris is the furthest ‘West’ condo in Singapore?

There also really aren’t any other condominiums in the close vicinity.

The nearest condo we can pick is Summerdale, an Executive Condominium completed in 2000.

Let’s see below the price comparison for The Centris vs Summerdale from 2006. 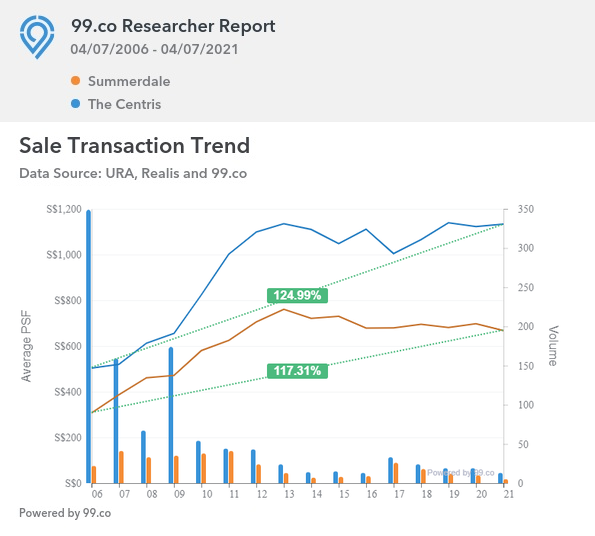 Over such a long period of time, the difference may not seem significant.

However here are some observations: 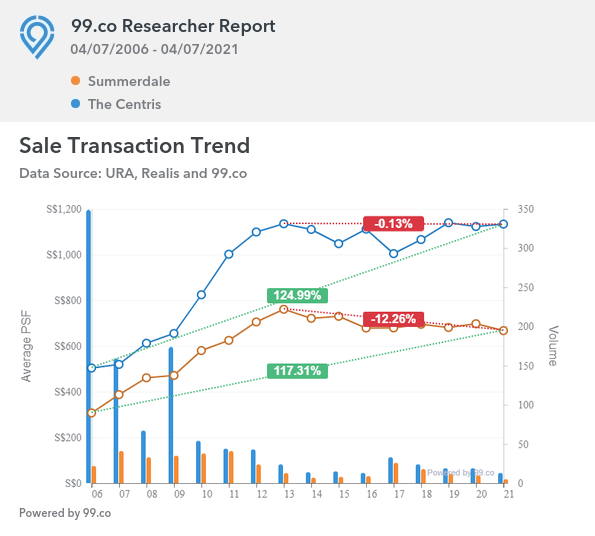 Maybe a property with better location (Integrated Project) holds its price better over the long run?

Let’s move on to the next Integrated Project…

Did you know a majority of condos around Punggol were completed in 2015/2016?

Let me tell you a secret of property investing.

It always pays to be the first mover in any area.

Yes, it is having some expectation of the future… You can’t yet visualise what exactly it will be like…

But the right buys in a growing new area, has historically reaped strong returns for investors. 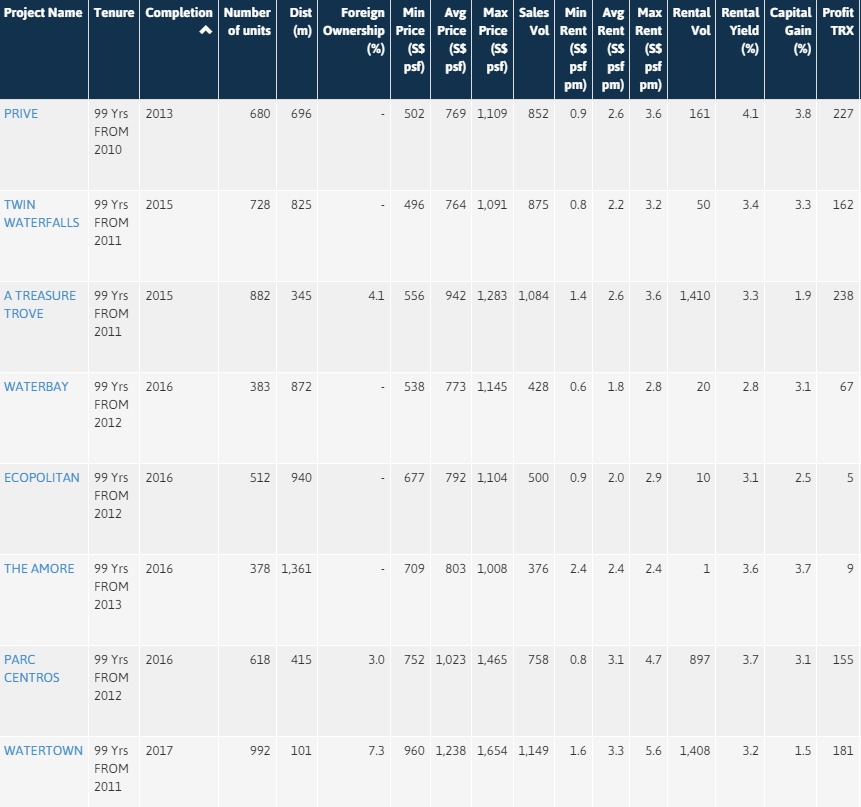 Here, I compare the Integrated Project Watertown with 2 other nearby projects, A Treasure Trove and Parc Centros. 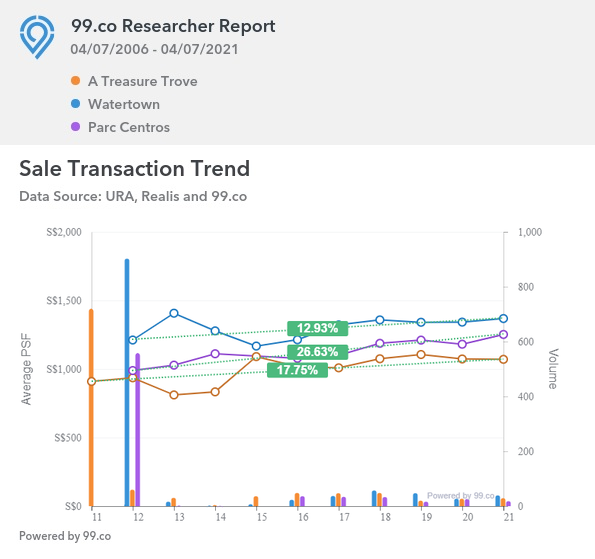 Regardless of which project, owners there made a handsome return.

Here are some breakdowns of the statistics –

Now who says Punggol is ‘ulu’?

The first Integrated Project in the Northern Singapore Districts

North Park Residences benefits from a general lack of condo supply near North-South Line MRT stations in the region.

Towards the left, you have to go all the way to Yew Tee to find Yew Tee Residences that’s near the MRT, and to the Right (South), Ang Mo Kio where you have Centro Residences.

Just check it out yourself on the map.

Maybe that’s why a lot of attention has been put on upcoming Canberra to be the next hottest residential enclave along the NS Line.

Will this new condo near to Canberra MRT have strong results? Watergardens at Canberra (Review Coming Soon)

I recall during launch prices were going as high as 14xx psf which many buyers thought were crazy for outskirt areas. 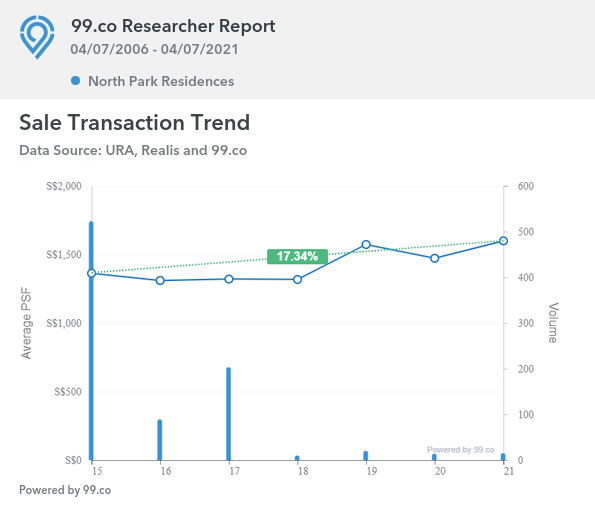 May I just sidetrack off Integrated Projects for a moment, to further value add you with my findings…

Below are 2 of the condos around, Euphony Gardens (99-year leasehold), and Seletaris (Freehold). 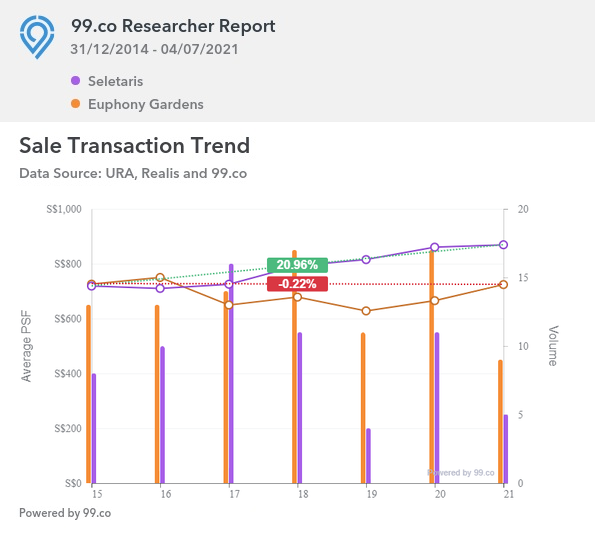 Both condos were completed in 2001 and are about 20 years old as of writing.

The leasehold condo on the other hand (orange line, Euphony Gardens), shows more of a downward trend.

Back to the West!

The jewel of the west most stop along the Downtown MRT line: Bukit Panjang.

A pretty self-sufficient estate in the past, the area has been completely revitalised with the improved connectivity of the Downtown MRT line.

There is an interesting comparison to be made here between Hillion Residences and another mixed development launched just 2 years earlier, The Tennery. 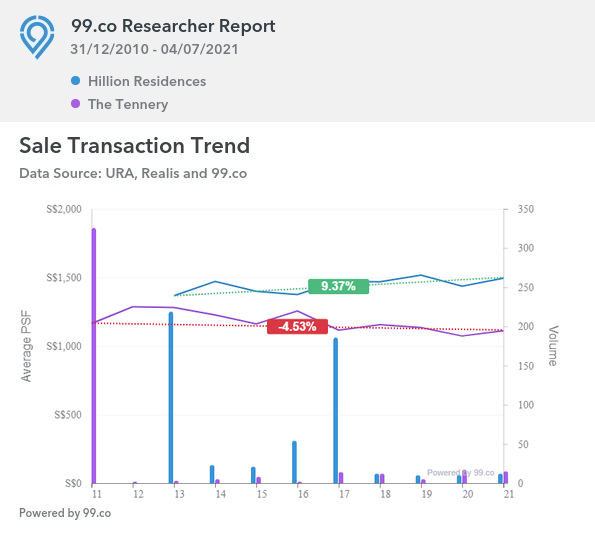 Very interestingly, in 2017, there was a high take-up for Hillion Residences units.

That year was also the year of completion for the project, as well as the commencement of the entire Downtown Line.

How come 2 such similar projects (in both age and location), can have such differing results?

To elaborate more on the pricing trend, The Tennery had more unprofitable transactions 41, vs 36 profitable, while Hillion Residences has 34 profitable vs 6 unprofitable.

Here are my thoughts:

Hindsight is certainly 10/10, but we try to take lessons from it anyway.

New launch is not a sure make money proposition, as The Tennery illustrates.

Bedok is another one of those locations where the nearest condo besides for the Integrated Project (Bedok Residences), is almost 1km from the MRT station.

As we reach the 5th Integrated Project on my list, did we just realise that for many heartland areas the private condominiums tend to be located further away from the MRT?

That probably used to be the trend in the past, where HDBs tend to be located at the more convenient yet ‘noisier’ areas near the MRT, while private developments were at the more ‘exclusive and atas’ areas… which tend to also be less convenient.

Things have been changing now though, and many private projects can now offer the same level of convenience, or otherwise even greater than HDB flats.

In fact, statistics show that over the last 10 years there has been an increasing % of the population living in private property.

Whereas % of HDB dwellers have dropped. 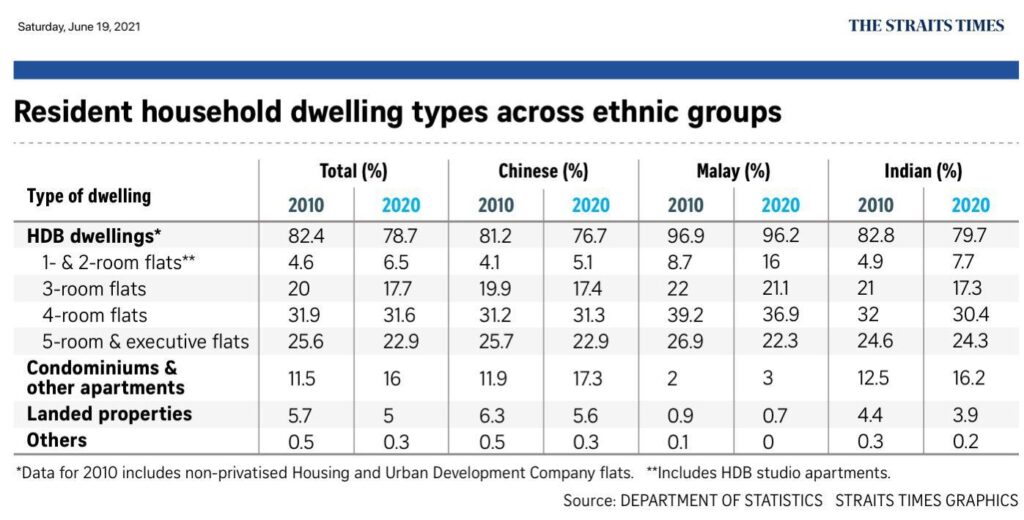 For this last one, let’s compare Bedok Residences with another project right beside the MRT 1 stop westward (Kembangan), Astoria Park. 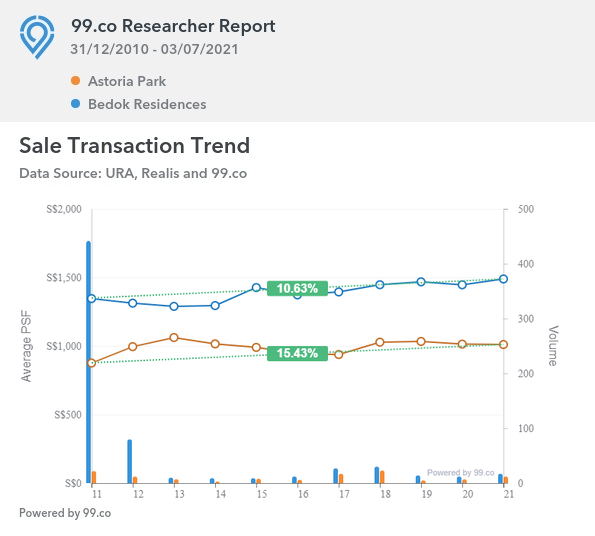 Judging by average pricing, if you had bought Astoria Park instead of Bedok Residences back in 2011, your price should have appreciated by about 15.43%, vis-à-vis 10.63% for Bedok Residences.

Let us look a little deeper:

There were 3 unprofitable transactions for such units, highest was a 25k difference from original purchase price.

Bedok Residences has 95 profitable transactions, with an average profit of $104,998.

Very similar numbers in the details, and overall, I would consider this comparison akin to the first example of The Centris vs Summerdale.

In fact, 2011 was the ‘only‘ right timing to get a better average return from Astoria Park. If you compare any other year beyond that till 2021, the average return is higher for Bedok Residences.

In recent years, like Summerdale, we also start to notice downward pressure on prices at ageing Astoria Park.

End of the day, resale is definitely not ‘dead’ when it comes to capital appreciation as what many in the market may say.

However, it does carry a higher ‘Exit Risk’. (Upcoming Article… Make sure to Subscribe so you don’t miss anything!)

How does Pasir Ris 8 compare?

Let’s compile all the integrated projects we discussed into a price graph.

In addition, I’ll include an existing new launch which serves as a current comparable to Pasir Ris 8: Sengkang Grand Residences.

These are the Outside Central Region (OCR) Integrated Projects.

According to Colin, “Prices wise, we estimate that prices will be $1,800psf and above, along that range. But as prices are not confirmed yet, who knows, if we submit an interest, we may get a pleasant surprise on launch day.”

My thoughts: I wouldn’t be surprised if prices would really average $18xx psf and above.

Simply comparing with Sengkang Grand Residences, the market sentiment is stronger now, so we cannot expect a similar pricing at Pasir Ris 8.

About 30% of units at Sengkang Grand Residences were sold on launch day.

For Pasir Ris 8, I expect demand to be greater as there are generally less launches in the Eastern Districts (17, 18 and 16).

Supply is dwindling with even the largest development in Singapore Treasure at Tampines (2203 units), at 92% sales. 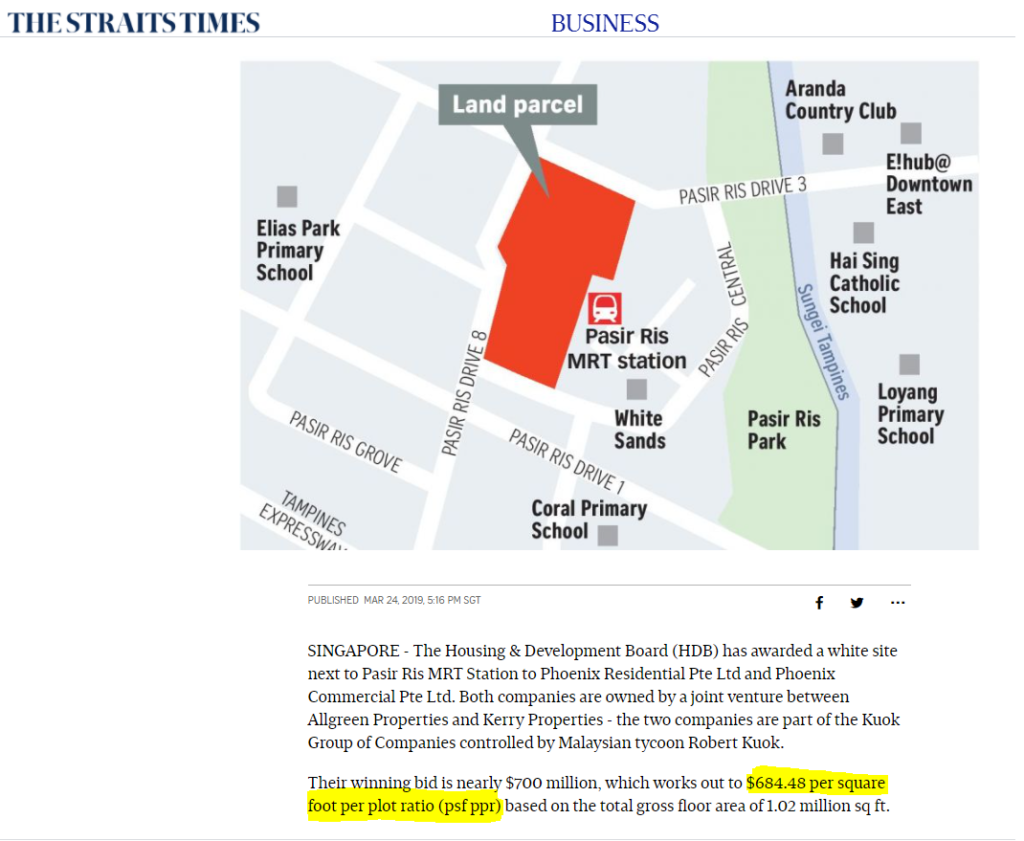 For buyers anticipating this launch since March 2019 due to the low land bid price by the developers, you will likely be sorely disappointed.

Yet, Pasir Ris 8 is likely to sell at a higher average PSF.

This is really down to superb timing by Allgreen the developer.

Still, I do still see upside potential at Pasir Ris 8, especially with the plans for the Cross Island line and Pasir Ris interchange firmed up.

From an investment standpoint, short term margins at Pasir Ris 8 are unlikely to be too high, probably in the 10% range like Hillion Residences.

Nevertheless, make sure you place an interest for the ballot as you never know, we could be surprised at the prices on launch day 😊

Thank you for reading till the end of my article!

For a personal consultation, get in touch with me.