As reported by Bloomberg, many of the Super Rich choose Singapore.

So, what makes Singapore one of the top destinations for foreigners to consider moving to?

With high transparency and low corruption, Singapore has been consistently ranked as one of the easiest places to do business.

The strong systems have streamlined many processes, applications and filings that come with running a business.

Even Nas himself said: “it’s an easy place to do business in. There’s minimal corruption and established guidelines – if you’re good, you’ll get work.”

It takes less than 2 days to set up a business in Singapore!

Among developed countries, our taxes both for personal income and corporate income are amongst the lowest in the world.

Personal income tax differences are higher, with Singapore’s highest tier for income exceeding S$320,000 per year only being 22%. Whereas for other developed countries It can be as high as 50%+ for the top income earners.

Not to mention reliefs, exemptions, and rebates!

With one of the best and busiest airports in the world coupled with cheap, safe air travel connecting the island to expanding Asian nations, Singapore is the perfect base from which to explore the region.

Commercially, Singapore is a premier global hub port which sits at the centre of a web of trade routes connected to 600 ports in over 120 countries, giving users reliable, value-added and cost-efficient marine services and facilities.

We are the only port in the top 5 busiest ports in the world located outside of China.

Amazing for such a small country!

Known also as ‘The Garden City’, urban planners are weaving nature throughout—and even into its towering architecture. New developments must include plant life, in the form of green roofs, cascading vertical gardens, and verdant walls.

Through government intervention on pollutant standards, we are also able to achieve a high quality of air in Singapore.

One of the reasons Jim Rogers chose Singapore instead of Shanghai or Hongkong was because of lower air pollution.

With world leading educational institutions and a strong culture of excellence, the education system in Singapore is consistently ranked as one of the highest in the world.

The education ministry’s goal, ’Every School A Good School’, provides every child with the opportunity to develop holistically and maximise his or her potential.

Multilingualism is also a key focus in education, where every student learns English, along with their mother tongue (Chinese, Malay or Tamil).

Famously bullish on China, Jim Rogers also picked Singapore so that his children could pick up mandarin. You can even find videos of them talking in mandarin on the internet!

Although there might still be ‘part-time paparazzi’ where people just whip out their handphones and snap pictures of celebrities, locals generally mind their own business and are not as aggressive as their foreign peers.

So, when it’s time to live out of the limelight, Singapore becomes a consideration.

If New York is the melting pot of cultures, the city of dreams where anything is possible, the Singapore city would be the Asia equivalent.

As people from all over the world gather and mix, there is a community for you regardless of your background.

This multiculturalism also presents itself in the multitude of food choices in various cuisines.

This is one of the most important reasons for living in Singapore.

There are not many countries in the world where residents can confidently say that they would feel safe at any place and any time. Singapore is one of those places.

We are so big on laws that it is one of the common conversation starters between foreigners and locals – how Singapore has a law on everything.

With the ban on chewing gum being the most famous.

The laws are enforced, non-tolerant on small crimes and infringements such as littering, jaywalking, and petty theft, even if they seem so minor… so as to inculcate a law-abiding culture and prevent any escalations to serious crimes.

And of course, guns and weapons are entirely illegal.

Not immediately obvious, the Singapore Dollar’s (SGD) strength is also a key consideration when relocating to Singapore.

That’s because a relocation can involve transfer of large sums of funds and assets from one currency to another.

Through the Singapore government’s exchange rate based monetary policy, the SGD is managed against a basket of currencies of our major trading partners and competitors

Being a trade dependent economy, it is important that the currency remains strong as an effective tool to combat inflation.

Therefore, when immigrants transfer their assets into SGD based, they can feel safe in our currency.

If reports from the largest Swiss banking institution in the world, UBS, are anything to go about, Singapore’s private home prices, despite rising by almost 8% in 2018, are fairly valued.

In fact, when you compare Singapore’s status as a financial hub with similar countries like Hong Kong and Switzerland, which UBS rates as over valued and having a bubble risk respectively, (depending on how you look at it), there might even be a case to say Singapore’s real estate is undervalued… if you pick the right ones.

Furthermore, as nationals or permanent residences of the following countries, the tax treatment will be the same as Singapore citizens.

That’s more advantageous than even being a Singapore Permanent Resident!

Well that’s a round up of the Top 10 Reasons Foreigners Move To Singapore!

If you enjoyed the read and are keen to find out more about about how you can get started with Singapore Real Estate, I have the perfect guide for you. 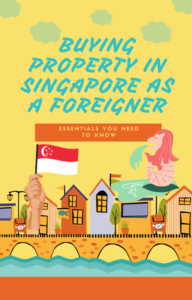