Would you like to know How The New HDB CPF Rules which kick in from the 10th of May 2019 affect you?

As this is a popular topic right now and has major reverberations on the property market, I decided to chime in with my own thoughts in an easy to understand video on these new HDB CPF rules.

This topic first came about 2 years ago when Lawrence Wong so famously commented that not all HDB flats are eligible for SERS. In the first example of expired leases on residential properties, the government also announced that 191 private terraced houses at Geylang Lorong 3 will be returned to the state when their leases run out at the end of 2020.

It was then confirmed that HDB flats face the same fate when their 99-year leases run out.

This was the hottest topic on the streets for the months to follow, where there were constantly articles in the press discussing it.

Being close to the ground marketing HDB flats for sale myself, instead of asking questions about the condition of the flat, the facing etc, the new opening question on the buyer’s lips were: How old is your flat? How many years of lease left?

The notion that ‘your HDB flat is an asset’ held strongly by many, somehow didn’t hold so true anymore.

While the private residential market had a turnaround due to the strong enbloc and land sales, the HDB index further languished, continuing the fall since 2013.

The HDB CPF rules then probably also contributed to this negative sentiment as it used a strict cut off criteria: the lease of the flat being less than 60 years. 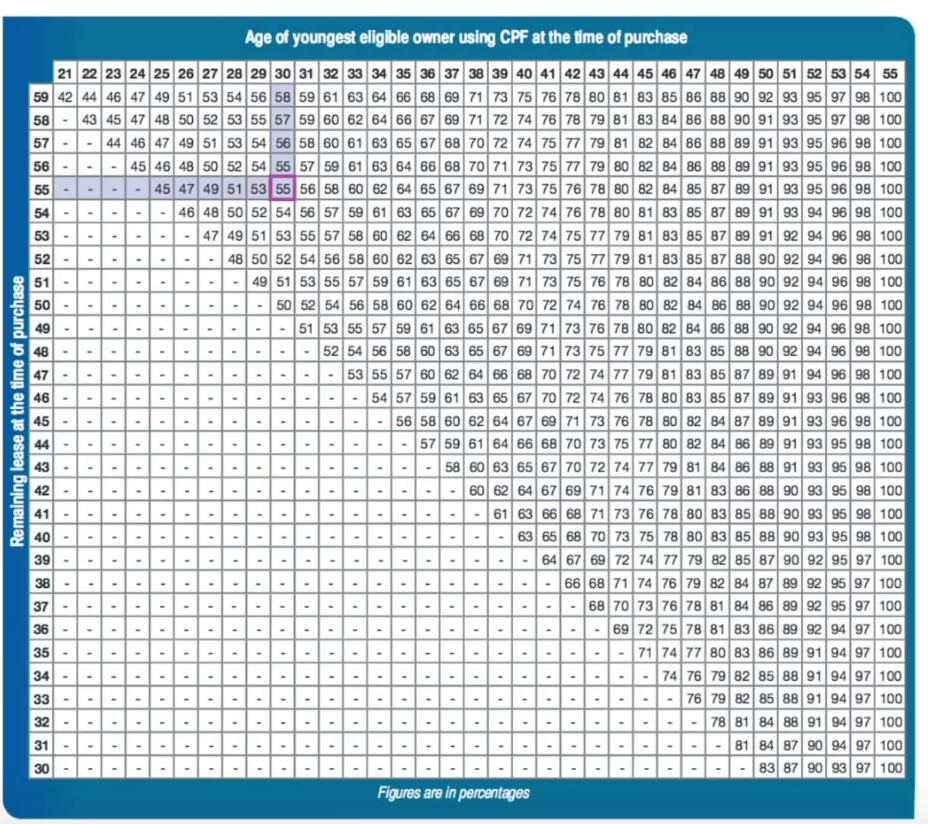 CPF To Lease Chart (Based On Old HDB CPF Rules)

For example, if the youngest buyer is 30 years old, and flat has 60 years of lease left, as normal, he is able to use his CPF up to 100% of the HDB’s valuation limit or purchase price, whichever is lower.

This drastically affects the purchasing power of the buyer as he now needs to fork out 42% of the purchase price in cash!

Assuming it was a 500k flat, that’s S$210k! (including down payment and mortgage servicing)

It made it much harder to purchase older flats, unless you’re cash rich! 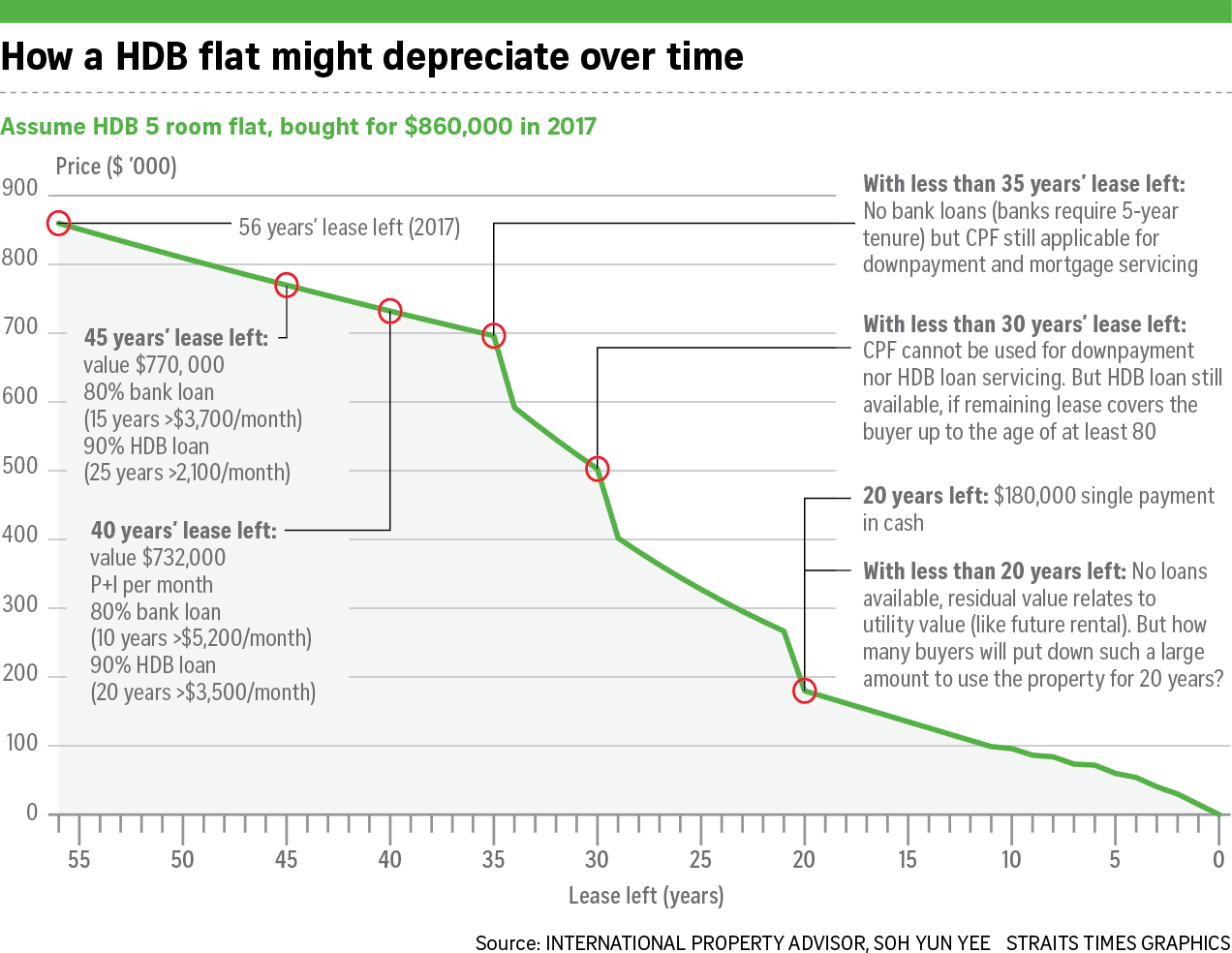 This HDB lease decay graph pretty much sums it up.

There were clearly some issues with the HDB CPF policies which needed sorting out.

And so in early March 2019, Lawrence Wong announced that changes to this rule would come in May.

Fast forward to the present, the annoucement is made! Let’s focus on these New HDB CPF Rules and how it affects us.

First, a quick explanation on these new HDB CPF rules.

It changes the focus from the years of lease left, to whether the lease length can cover the owner till old age, or more specifically, 95 years old.

That was actually the original intention as well, to make sure that buyers don’t buy flats which are too old, hence outliving the lease of the flat.

However, as Singapore’s population ages and flats get older, those old HDB CPF rules unfairly penalized the older buyers and older flats.

The former, contented to buy an old flat but less willing to do so because of the high cash outlay, and the older flats finding it difficult to have suitors.

As long as the sum of the age of the younger buyer and the flat’s remaining lease is at least 95, 100% of your CPF up to the valuation limit or purchase price of the flat, whichever is lower, can be utilized.

1. Properties with lease > 60 years. Demand would drop, because some of the buyers who had opted for these flats due to the lower cash outlay, can now consider older flats instead. This could result in some softening of the premiums these new flats can command in the market.

2. Properties with lease < 60 years. Prices of such flats would not fall off a cliff anymore like when the old HDB CPF rules were in place, but would instead depreciate more gradually, providing price support. On the upside, they stand to benefit from the increased demand from the buyers shifting from category 1. Expect even a slight uptick for flats in this category.

On the buy side,

3. Younger buyers, with the previous HDB CPF rules, could opt for an asset progression plan involving an older flat purchase first, so as to reduce initial expenses, while accumulating capital for a future upgrade. Now, it’s harder for them to do so, as a cash tight young couple of 27 years must buy a flat of at least 68 years in order to use 100% of their CPF. But good news for young purchasers of older flats previously – it’s likely easier to resell again later!

4. Older buyers *Update from Video* – initially sounded like they stand to benefit from being able to use their CPF for older flats in the new HDB CPF rules. After looking into more details though, it’s status quo from before as once you are 55, you already can use 100% of your CPF regardless of the age of flat.

Overall, for the entire HDB market, I believe these tweaks to the HDB CPF rules are very welcome.

Flats with shorter leases wouldn’t be shunned as much, and this positive sentiment would provide buoyancy to the values of our HDB flats.

Don’t expect the flats of new prices to drop much though, as demand for them should still remain high.

After all this tweak doesn’t change the fact that HDB values would still go to 0 as the lease runs out.

As of writing CPF is yet to announce the new pro-rated CPF usage chart for cases where the sum of age and lease is less than 95 years. So maybe I’ll update this page when that’s released!

For the folks who fancy leasing HDBs after the 5-year MOP period is up for their super high yields not found in private residential properties, we await to see if banks tweak their loan terms accordingly for higher Loan To Values and Tenures. The really old flats, with their low quantum, could be gems ????

What do you think about these new HDB CPF rules? Let me know in the comments below.

Remember to subscribe and join my community for access to all my offers and first hand updates.