Home » The Woodleigh Residences Relaunch – Is It Worth It Now?

The Woodleigh Residences Relaunch – Is It Worth It Now?

The Woodleigh Residences, an integrated development by SPH and Kajima will be relaunching this coming weekend 11 May.

As announced, prices for this relaunch at The Woodleigh Residences are starting from only S$1,733 psf for the 2 bedroom units, while 3 bedroom units start from 1.7xxM.

Close to 50% of all units sold at The Woodleigh Residences, with the 2-bedroom units being the most popular.

Watch my latest video below as I revisit the project to share my view on this unit type!

For comparison, the lowest psf for a 2 bedroom unit sold at The Woodleigh Residences back at the initial launch was S$1,926 psf. The highest? S$2,318 psf.

These are the most recent transactions at Park Colonial. 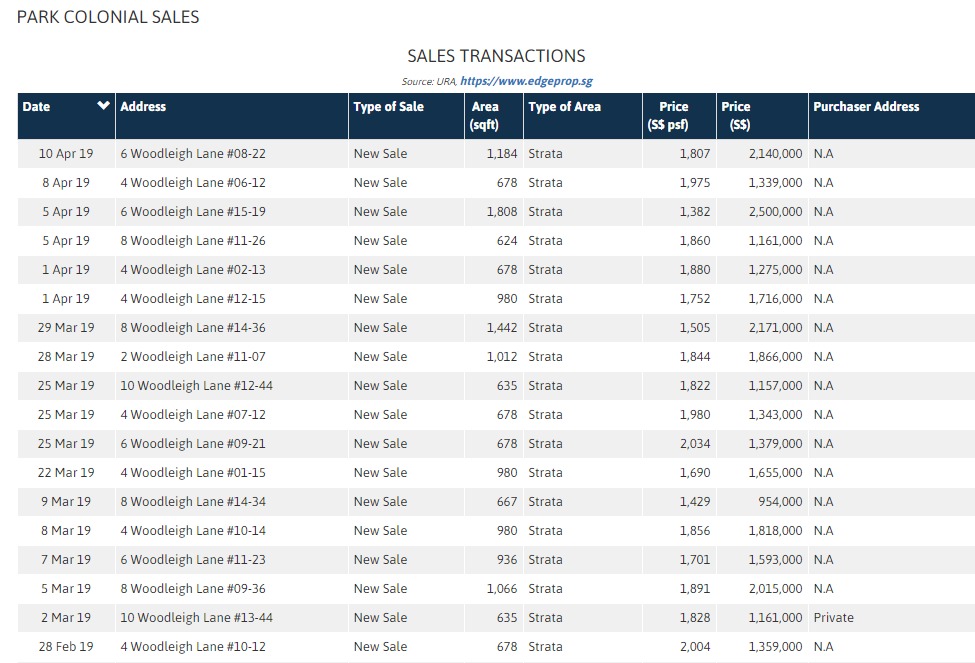 Both The Woodleigh Residences and Park Colonial are on 99-year leasehold land.

They would also complete within 2 years of each other.

The Woodleigh Residences’ land was bought only at a slight premium vs Park Colonial.

I think The Woodleigh Residences edges Park Colonial slightly in terms of location as it has the convenience of being integrated with a mall.

At first glance, it certainly does appear to be a no-brainer purchase for units at The Woodleigh Residences going sub-1800psf, as a high number of Park Colonial transactions have already exceeded the S$1800 psf mark.

For this relaunch, the initial news from developers then was that sales would be on a first come first serve basis on 11 May.

I predicted that response from buyers would be good, hence such a method of sales might not ensure a fair outcome.

I reached out to a few of my clients to inform them about this opportunity.

I told them this: Here’s the latest update at The Woodleigh Residences, seems good, here is the basic info, price savings and potential capital gains. But, let me do more analysis first.

If it’s really that good, I want to make sure they’re first in line.

I predicted it would be hot, and sure I’m not the only one.

Less than a week later, I received this message from my contact:

Due to Overwhelming Responses, The Woodleigh Residences will be Balloting instead of first come first serve on 11 May 2019 (Sat).

That’s good news and fairer for all buyers!

So, The Woodleigh Residences – Is It Worth It?

It is likely that a lot of the cheaper psf units at The Woodleigh Residences are slated to be facing Upper Serangoon Road.

Therefore, we can’t do a blanket comparison with the general transactions at Park Colonial.

Below is a snapshot of transactions at Park Colonial stacks 28 – 34 which are the 1-bedroom units facing Upper Serangoon Road.

As you observe, prices are all mostly around the S$1700psf+ range.

If you add a conservative 5% premium to account for land cost and being an integrated development, The Woodleigh Residences should be about S$1,785psf for similar units.

Next comparison is The Woodleigh Residences vs other integrated developments.

A recent one also in a growth area would be Park Place Residences at Paya Lebar.

Between The Woodleigh Residences and Park Place Residences, the latter is better located at a key hub of activity in Singapore.

The residences would not just be integrated with a big mall and 2 cineplexes, but also 2 MRT lines and commercial office space.

There were also 2 phases of sales for Park Place Residences.

For a better comparison, I would be using the phase 1 sales in March 2017, as market sentiment then is more similar to the current sentiment.

Developer is a victim of their own high land bid.

Then again, what alternatives are there in a similar up and coming location?

If there were in future, they might be even more expensive.

Why the big hoo-ha over a price drop then?

Because it’s an opportunity to be one of the owners with lowest priced units in the development.

The same thing happened at Affinity At Serangoon.

Since the higher pricing has been proven, now you’re buying below that, next time you would be able to sell again at the higher, proven pricing.

I understand that. Because where a majority of transactions are made, it forms the support pricing of the development.

And upon expiry of Seller’s Stamp Duty or usually at TOP, owners would usually try and sell at 20-30% above their purchase price.

This applies only to new launch property. You can learn more in my New Launch Vs Resale article.

However, for The Woodleigh Residences, I don’t think this is a strong reason to push the sale.

After all, despite the rosy announcement after the launch that they sold 60% released units during the VVIP preview, it amounts to only 30 units, out of the 50 released.

To be buying at a price lower than only 30 owners, isn’t significant.

If you’re buying lower than at least hundreds of owners, now we’re talking.

Seems more like the developers of The Woodleigh Residences over estimated buyer’s willingness to pay, and are now adjusting their pricing accordingly.

Still, there are signs which support pricing growth at The Woodleigh Residences.

1. Being an integrated development above an MRT, there can only exist that many.

Time and convenience are valued resources and people would always be willing to pay premium for such comforts.

This scarcity would help to support the price and encourage growth in the long run at The Woodleigh Residences.

Comparing with nearby integrated developments, the soon to be launched one at Buangkok MRT by CDL and Capitaland is expected to be priced at around S$1500 psf.

Plus, 1 mrt station away at The Poiz Residences at Potong Pasir, resale transactions have hit a high of S$1,755 psf in March.

These provide confirmation that a S$1700 – S$1800 psf entry price at The Woodleigh Residences can be supported.

2. Bidadari Massive Growth Area. There are big plans for this estate. Our government envisions it to be the next Bishan or Toa Payoh.

As recently as a few days ago there was a new announcement on plans for a new 10ha Bidadari park.

And when the locale expands and matures, there would be many HDB upgraders from the vicinity, or those living in further away towns like Punggol, Sengkang or Hougang looking to move closer to the city.

These effects would help to push up private property prices, and The Woodleigh Residences is at the centre of it all.

Contrasting with some new developments in mature estates near existing MRT stations, besides for Park Place Residences in the East, we have Artra, a new launch in the west at Redhill, and at Queenstown, a recently completed condo Commonwealth Towers.

Below are their respective transactions.

We can draw this conclusion: all else equal, a condo under construction would sell for a lower price, as the benefit is not enjoyed immediately, and there is some risk involved.

When the development is then complete and goes onto the resale market, then you can see the real prices that buyers are willing to pay.

And for a mature estate like Queenstown, despite Commonwealth Towers not being an integrated development, resale units going at S$1900+ to even above S$2000 psf certainly bodes well for future capital upside at The Woodleigh Residences.

What are the possible risks for The Woodleigh Residences?

1. Oversupply in the North Eastern area of Singapore.

Launches: The Tre Ver, Park Colonial, Florence Residences, The Garden Residences, Affinity At Serangoon, Riverfront Residences… add Gazania and Lilium at Bartley.. and including The Woodleigh Residences, there is easily about 5,000+ completed units coming onto the market within the next 3 to 5 years. 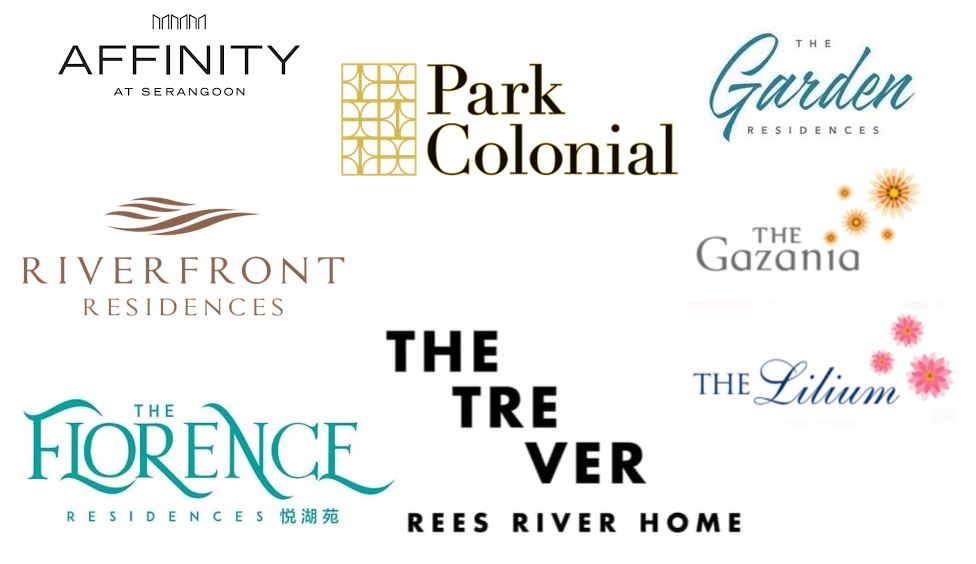 This area of Singapore has many young aspiring families looking for a lifestyle upgrade. It is also where real estate activity is high.

While every project has their pros and cons, it is important to be selective in choosing the right development to purchase.

In this respect, The Woodleigh Residences is in my opinion least affected by this North-East supply avalanche as not only is it the best located project of all, the number of units is also palatable at 667.

Park Colonial, for example, has 805 units. The Florence Residence has 1410 units, and The Riverfront Residences, 1472 units.

Have you visited the show units at The Woodleigh Residences? To me, they are quite small.

Even though the tune of ‘small units have already been accepted with 1bedders as small as 200+ sqft existing’, these are mostly in areas where rental demand is high, and there are a lack of larger options (such as HDBs).

In exchange for the convenience of living close to their area of most activity, people are generally willing to sacrifice a little on spatial comforts.

However, in generally populated residential enclaves where space can easily be found in HDB flats, how willing are people going to be to pay large premiums just for a marginally better location?

This is something still untested in the market, and we can only wait to see in a few years’ time.

Crucially, the government is clearly advocating larger sized apartments through their ruling last October which increases the average unit size that developers have to build.

Some buyers may feel, since prices are already cut, if they hold out and wait longer they might cut more!

It’s a waiting game to see who bites first.

If you won’t, some other buyers will, and in my opinion, units between the range of S$1,700 – S$1,900 psf at The Woodleigh Residences should be able to find buyers, so further price cuts won’t be necessary, and would also be cutting developer’s margin razor thin.

In Summary, The Woodleigh Residences…

– Has strong price support from neighbouring new projects as well as resale transactions in similar mature estates and integrated developments.

– Is centrally located in a high growth area, with good potential future demand from upgraders and tenants.

– The (really) small bedrooms are untested in a HDB enclave.

– Pricing while having good support, is still high for the mass market segment, and capital upside from a Return On Investment (ROI) perspective would be lower.

Overall, The Woodleigh Residences is only 5 stops away from Dhoby Ghaut, and has a mall run by SPH, a company with a history of running successful retail operations such as Paragon and The Clementi Mall.

In the long run, it is hard to see anything going awry with this development.

For the own stay purchaser who thought the initial 2000 psf+ was pricey, now would definitely be a good time to enter.

For the pure investor buyer at The Woodleigh Residences, there is definite upside potential, and whether it’s a suitable choice for you depends on your stage of life, risk appetite, and targeted returns.

I touch upon this briefly in one of my comprehensive writeups – How To Retire With Real Estate: The Ultimate Guide.

If you’d like to connect with me, you can learn more about me here, and fix an appointment using the buttons on the page, depending on whether you’re buying or selling.

Alternatively, drop me a message here.

If you’re entering the ballot for The Woodleigh Residences this weekend, all the best!