Home » 10 Singapore Transformations To Look Out For in the next Decade (RANKED!)

10 Singapore Transformations To Look Out For in the next Decade (RANKED!)

Have you wondered what are the Singapore Transformations to look out for in the next decade and beyond?

Terms like the 2nd CBD, Greater Southern Waterfront, Jurong Lake District, Paya Lebar Airbase relocation as well as many others have become trendy topics for much discussion over the years.

Not just a listing of Singapore Transformations, I give you my personal ranking of the Top 10.

In addition, for every transformation, I also share the relevant Real Estate Projects which are riding the ‘Transformation Hype’.

You may not agree with all of my selections and the order, but I guarantee that by the end of this article, you’ll have many takeaways.

All, without having to scroll through multiple websites finding information from all over the internet. Imagine being able to walk or cycle all the way from northern to southern Singapore, from Woodlands to the Greater southern waterfront. A stretch covering 24km.

Or the 11km Green corridor which will link our 3 national gardens from Jurong Lake through Botanic Gardens till Gardens by the bay.

Amazing connectivity and a real boon to nature lovers and fitness enthusiasts.

As a transformation across wide areas of Singapore, it’s hard to pinpoint specific projects which benefit from it.

The Mayfair Collection and Avenue South Residences do however have some of the best connectivity to this transformation. 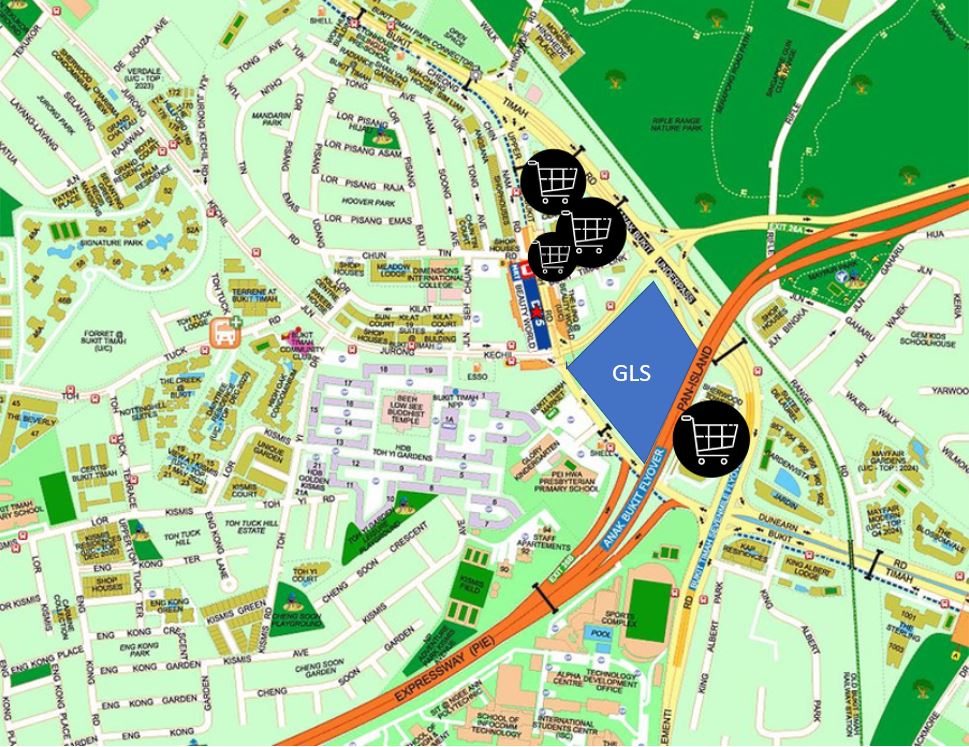 Anywhere else in Singapore where you have 4 existing malls, 1 upcoming integrated development with a transport hub, famous eateries, and 8 new projects under construction?

With a bonus potential MRT interchange?

In terms of a localised transformation at an existing mature area, it doesn’t get much bigger than Beauty World.

All projects pictured above within the locality are riding the hype, including the next, highly anticipated Forett at Bukit Timah.

I did a series of videos to preview the project with Project IC Jeremy Tan from PropNex. Click to watch!

Anyone who has been to Punggol will know that the estate is young, vibrant and full of activity.

And still, plenty of land for a 50ha, modern Digital district. 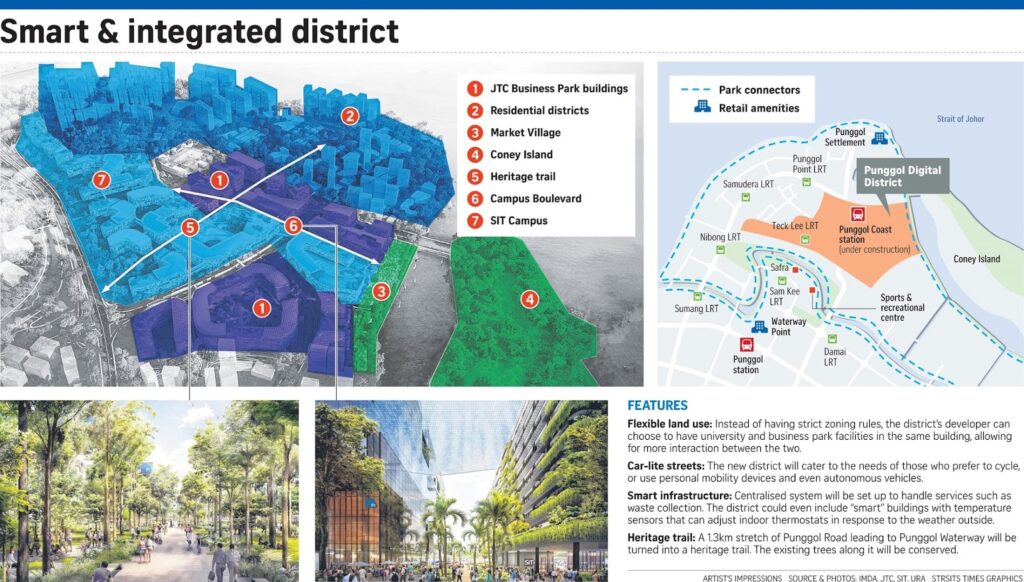 The perfect hotbed and demographic mix for technologies of the future.

So smart and modern, it’s best you hear more about it from its own video.

The area is known for executive condos. 2 recent ones are Piermont Grand, and Ola.

Also popularly known as the 2nd CBD, do you recall that it was way back in 2008 when the announcement to include new infrastructure in Jurong East was announced?

The name Jurong Lake District was also coined then. 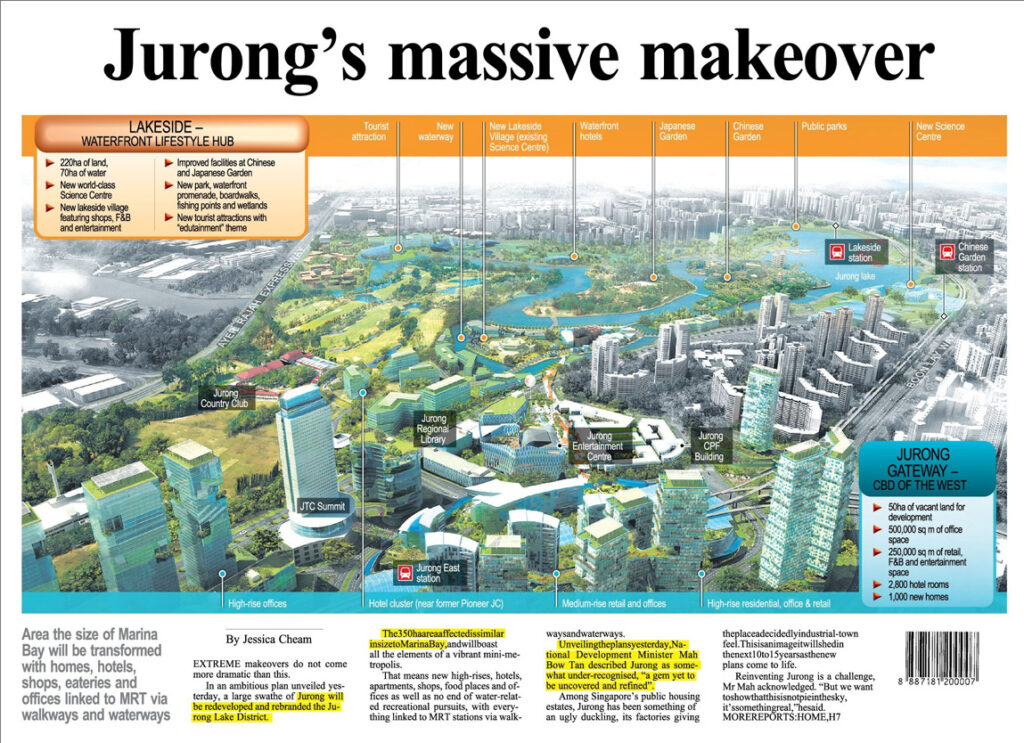 True enough, the changes have come to fruition with malls like Jem, JCube, Westgate, a Hotel, and even a general hospital.

Notably, in 2013 a market high was hit for suburban homes in the 1 day sell out project J-Gateway.

This was followed by the High Speed Rail (HSR) announcement, along with new initiatives like the Jurong Innovation District.

Then, the big BOMB: HSR delayed. As of now, even though news state the delay is till end of 2020, there’s really no guarantee when it will resume.

Still, I think the sheer size of the site at 360ha has great potential and worthy of a place on this list, especially if the HSR somehow gets back on track.

Extra thing to note: it’s also no longer listed as one of URA’s Urban Transformations.

Projects wise, with nothing new at Jurong since J-Gateway, the attention flowed to West Coast Vale with Parc Riviera, Twin Vew, and Whistler Grand.

How rare is waterfront living in Singapore?

The condominiums at the Keppel Bay area immediately come to mind.

And what about being by the water AND close to the city centre at the same time? 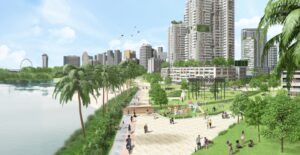 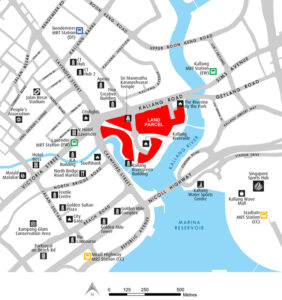 Already launched for sale, the pure size and complexity of the plans are exciting.

Just look at what’s written in the URA website below.

It’s almost going to be a mini town itself.

The project to look out for?

Itself. After a buyer triggers the estimated 5 billion plot.

Did you know that the current footprint of terminals 1 to 4 is planned to be DOUBLED? 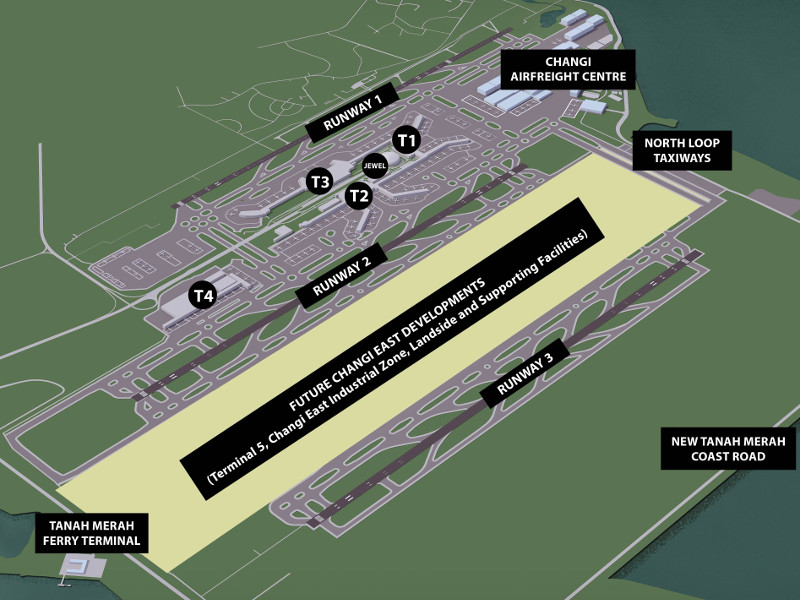 Especially with Jewel already opening to much hype in 2019, this was another major change in Changi to look forward to.

Otherwise, I would certainly rank this higher.

Still, I think we remain generally confident that the plans will come true in time to come after the situation settles down.

The projects closest to Changi region riding the hype are The Jovell and Parc Komo. 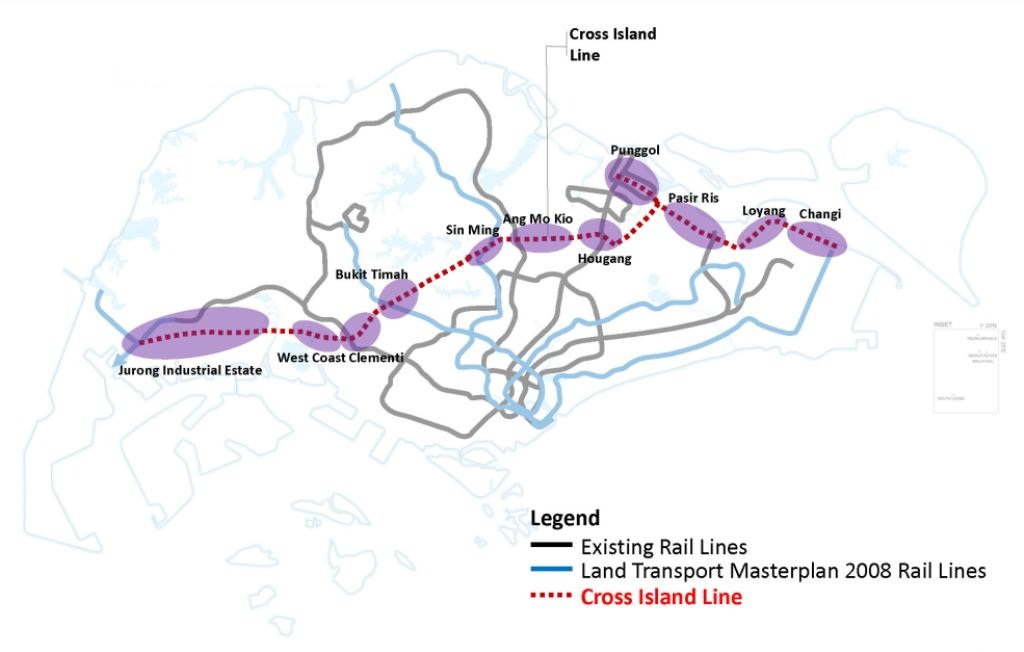 The Eighth, and as of now, latest New MRT Line announcement.

The first station locations were announced in early 2019, and a CNA article reported that from Ang Mo Kio to Changi Aviation park, a journey of 105 mins now, would only take 35 mins with the new line. 70 mins saved!

The hype certainly caused spikes in sales numbers for projects in the North-East, close to the newly announced stations.

No.3: Relocation of Paya Lebar Airbase

Did you know that this was first announced back in 2013?

It has been a good 7 years since.

What you may not know also, is that there’s still another 10 years or so before it happens.

As the relocation is only planned in 2030. 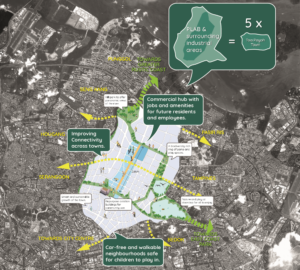 Despite the long timeline, one effect of the relocation would be the lifting of height restrictions.

That can very potentially lead to knock on effects on the surrounding estates as well. 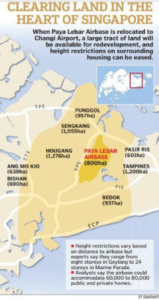 Parc Esta, the best selling project right opposite Eunos MRT has this relocation as one of its standout points. 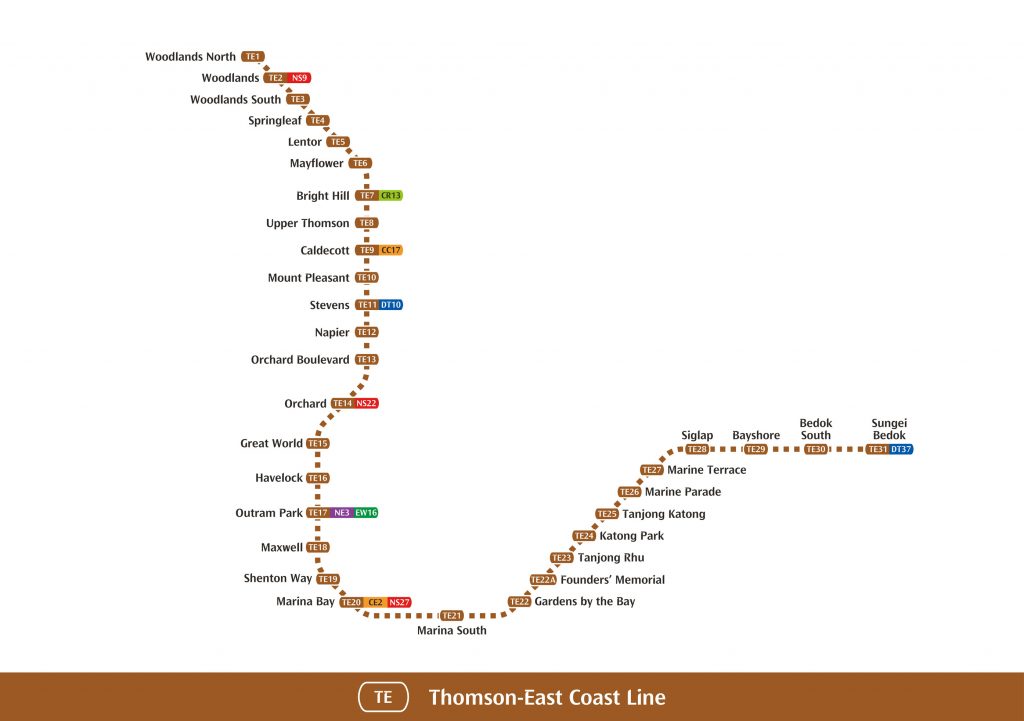 The latest MRT line to come operational since the Downtown line, the Thomson East Coast Line would be a game changer.

It connects up the key nodes of Singapore: Woodlands Checkpoint, The Central Business District, Orchard Road, and potentially Changi Airport.

Especially for Malaysians who work in Johor Bahru and commute to Singapore for work daily, the direct access to the city is very valuable.

Many projects are dotted along the Thomson East Coast Line.

If I had to pick a couple, they would be Amber Park and The Avenir.

Interestingly though, on the side of the Thomson East Coast Line northwards from the city, there aren’t that many new projects yet.

Probably something to look out for in the near future once the full line is up and running!

At 2000ha and 6x the size of Marina Bay, I think anyone would expect the Greater Southern Waterfront to be at no.1.

Like the Paya Lebar Airbase relocation, plans for the Greater Southern Waterfront first came into the public domain in 2013.

But, it was only after PM Lee spoke about it in 2019’s National Day Rally when it really came back into mind.

It promises to be an entirely new waterfront city with a mix of everything, even public housing.

Discussions over whether the HDB flats there would have a similar effect as the ones at Pinnacle @ Duxton quickly sprouted online. 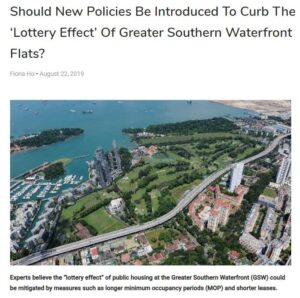 The first project launch right after the National Day Rally announcement was Avenue South Residences. It did well, with almost 30% of total sales on launch day alone.

Other projects riding the hype are Kent Ridge Hill Residences, and Marina One.

That rounds up my list of the Top 10 Singapore Transformations to look out for in the next decade and beyond!

Do you agree with my choices and order?

Did I leave out a transformation you feel deserves a spot in the Top 10?