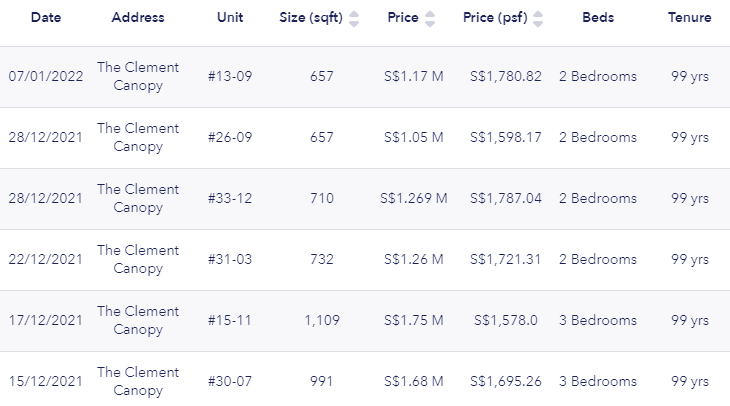 Lookin to Buy/Sell/Rent at The Clement Canopy? 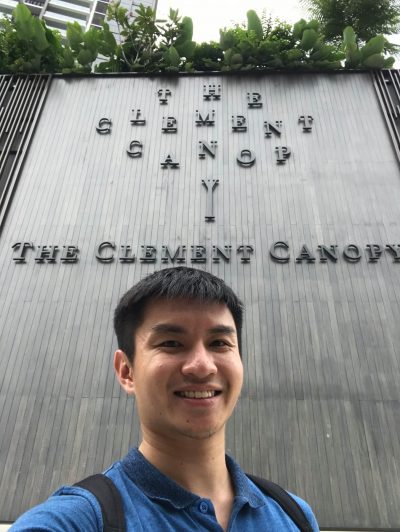 My name is Jim Tay, and I’ve been helping sellers, buyers, landlords and tenants transact units at The Clement Canopy since the project was complete in 2019.

If there’s something about The Clement Canopy you need expert advice one, Whatsapp me directly.

Read on to also find my analysis on the rental and resale prospects of The Clement Canopy. (Last Updated in June 2019)

Let’s first find out the baseline pricing for units at The Clement Canopy.

This refers to the support level where most of the first owners bought their units.

Based on transaction data at The Clement Canopy,

So now, at TOP, we would see the IPO effect come into play, where owners would want to price their units at a premium, to compensate for the risk of buying off plan.

If you’re not sure what this means, you can refer back to my article on New Launch vs Resale, 5 Reasons Why New Launch Is Better.

As a quick look at PropertyGuru would confirm, there are units asking S$1700+ and even above S$1800!

Would there be buyers for these units?

Here’s the thing. The Clement Canopy was built very fast.

I remember whenever I drove along AYE and see the towering 2 blocks, I would always comment to my passenger (whoever it was at that time), how fast it was being built!

The first sales of The Clement Canopy was in late Feb 2017.

And now, it’s been less than 2 and a half years and the condo is already completed with owners collecting their keys.

“all-concrete version of the PPVC (prefabricated prefinished volumetric construction) system, in which freestanding modules, complete with finishes for walls, floors and ceilings, are prefabricated and then erected on-site.”

Or simply known as ‘prefab’ for short.

TOP time is usually the perfect time to sell the property.

When it’s brand new, the new buyer would be the first owner to actually use the unit, and there’s still the 1 year defect liability period provided by the developers.

Heavy mortgage payments for first buyers would also not yet kick in.

Yet, for The Clement Canopy, because it was built so fast, this golden period also falls within the Seller’s Stamp Duty (SSD) liability period!

Thus, as of now, May 2019, all owners at The Clement Canopy are liable to either 8% or 4% SSD, depending on their acquisition period.

If you want to be the new owner of a move-in ready swanky condo unit at The Clement Canopy, with the assurance of the defect liability period, you’ll need to cover my SSD taxes too!

Are These Asking Prices At The Clement Canopy realistic?

On the resale market, The Trilinq at Jalan Lempeng is the closest comparison to The Clement Canopy, both in terms of development age and unit specifications.

Comparing with new launch projects (for buyers who can wait), there’s the upcoming Parc Clematis, on the former Park West site by developer SingHaiyi.

The plot of land was purchased enbloc at approximately S$850 psf ppr.

Furthermore, Parc Clematis is an enbloc project which entails higher admin and legal fees in the process, as well as additional costs to tear down the existing structure.

Arguably, location is also better due to closer proximity to the prestigious Nan Hua Primary School and Clementi MRT station.

Let me sum up these numbers in a line. 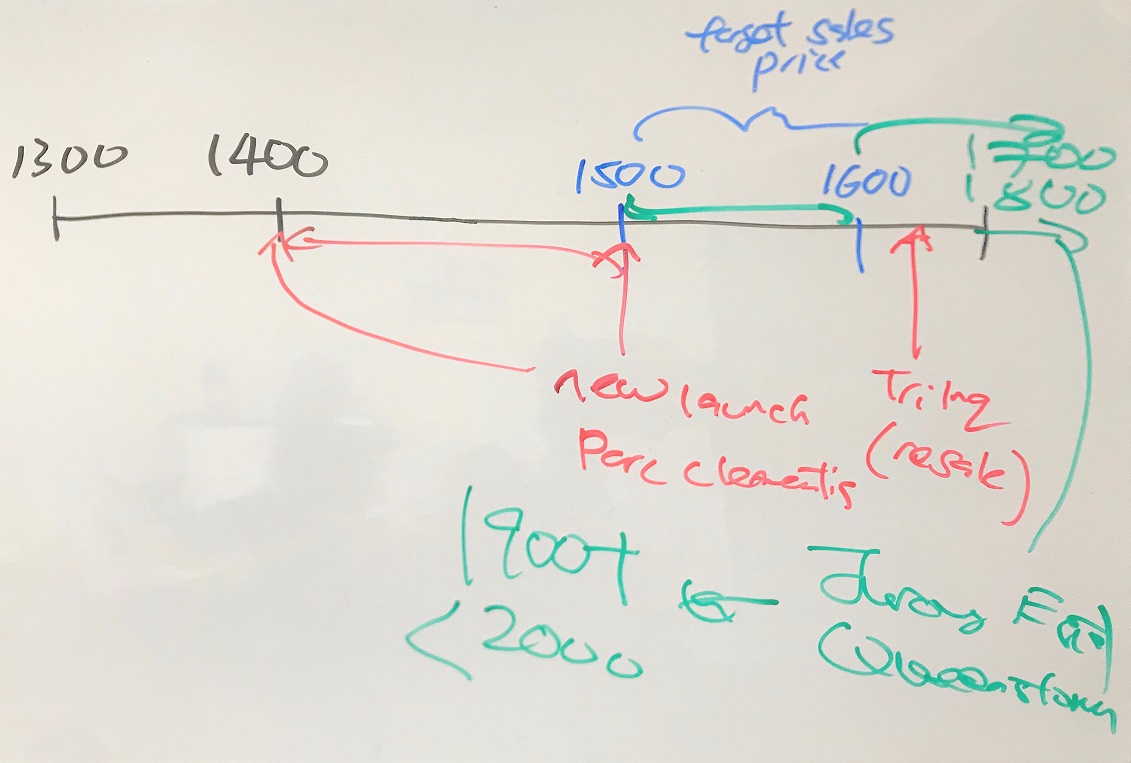 These are the key points:

1. For The Clement Canopy owner with units at 1300-1400 psf, and targeting to sell between 1500-1600 psf for a 20% capital appreciation, which is a decent return for a 2-3 year holding period. (and even higher possibly if accounting for leverage effects)

2. Good news is that The Trilinq already has a resale unit crossing the 1600 psf mark, and Whistler Grand, a yet to be completed project is also transacting at 1500 psf+.

3. While Parc Clematis would likely be transacting lower, the difference is unlikely to be very significant, and for buyers who need a place to stay immediately, The Clement Canopy would be preferable.

4. Even for asking prices at 1700 psf and beyond, it has already been proven to be achievable in the resale market just a few MRT stations away at Jurong East and Queenstown.

In summary, while The Clement Canopy may not be within the 1km proximity distance of Nan Hua Primary School, it is herself close to other prestigious institutions like Nan Hua High School, NUS High School and of course the National University of Singapore.

There just aren’t many condos of such quality in the west of Singapore, and The Clement Canopy is the first in the Clementi Ave 1 area, where there are a total of 3 residential plots of land.

As resident agent at The Clement Canopy, I am confident that the beautiful landscaping and finishing from reputable developers Singland and UOL would also help the development standout to potential buyers.

Meanwhile, for the landlords…

Who Are The Prospective Tenants At The Clement Canopy?

There are a few clusters

1. The Kent Ridge and Clementi Education Belt. Which comprises of, NUS, The Japanese Primary School, UWC (Dover Campus), Nexus International School, among others.

3. Jurong Lake District where there is so much activity from the many malls, business parks etc, yet only 1 condominium in that area.

How much would these tenants pay for rental at The Clement Canopy?

Taking data from nearby condominiums: Trilinq, J Gateway, The Parc, Dover Parkview and Heritage View, these are my estimated rental predictions for The Clement Canopy:

Overall At The Clement Canopy

I expect the mix of owner occupiers and investors to be 50-50.

Resale potential is high at The Clement Canopy and buyers who entered in early 2017 had perfect timing just when the market was turning… as Q3 2017 was the first uptick in the Property Price Index after 15 consecutive quarters of a downtrend.

However in the current climate in 2019 where the price index has fallen for 2 straight quarters following 5 quarters of growth, owners at The Clement Canopy who are holding for investment would mostly be focused on rentals as SSD is still in force.

While they bide their time to sell to the right buyers.

Interest in the area is also set to increase as one of the neighboring plots of land beside The Clement Canopy is up for tender.

The Clement Canopy is a 99-year leasehold condominium developed by UOL and Singland.

If I can help you, and you’ve read this far without submitting a form, drop me a Whatsapp!

We can have a chat poolside.