It was back it August 2016 where a Clementi HDB flat sold for over a million dollars. A record for a 5-room HDB flat outside the iconic Pinnacle @ Duxton project. 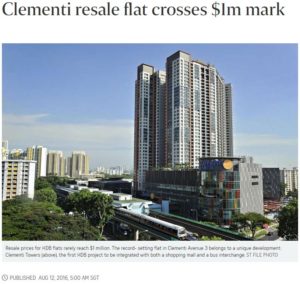 The development, Clementi Towers, was the first HDB project to be integrated with both a bus interchange and a mall.

A comment made then was: “I don’t think you will see $1 million flats in other estates,”.

Today, about 3 years later, there has been more than 70 flats transacting over a million dollar all over the country.

It is also obvious that such premiums are only reserved for newer flats with leases 90 years and more.

While prices of older HDB flats languish, the gap between the old and new flats keep increasing.

BTO still a good first pot of gold? Yes, if you get a good one, qualify, and can wait.

In future, as more and more new HDB flats reach their 5-year MOP, million dollars flats will no longer be rare unicorns.

What seemed unimaginable a few years ago has become reality.

Now, if you’re shopping for a resale HDB at Clementi, read on…

First, I have this map of the Clementi HDB town. 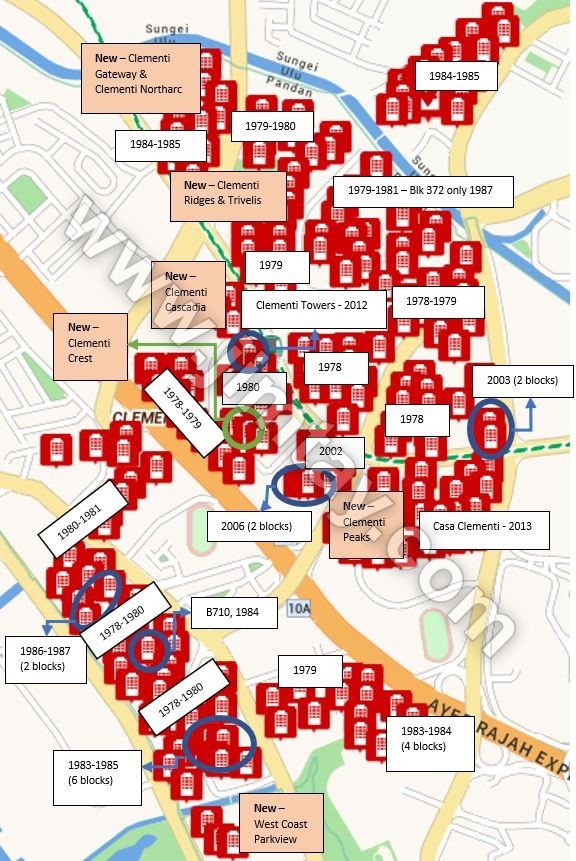 Years indicated are the lease start dates found from the HDB e-map.

The newest ones on the resale market now are Casa Clementi at Clementi Ave 1 (lease from 2013), and the million dollar HDBs at Clementi Towers (from 2012).

Taking the transactions at HDB Clementi Towers out, below are 2 graphs showing the pricing trend between the old and newer flats. 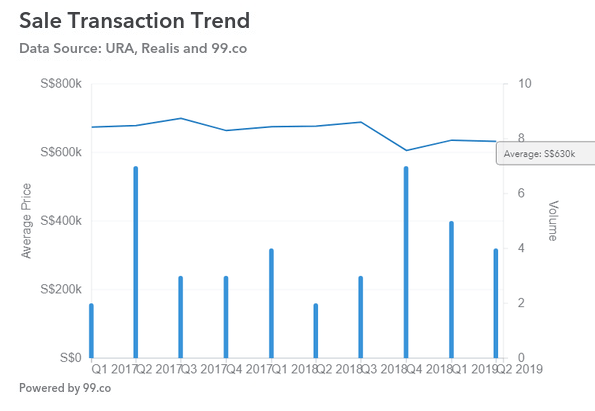 4-room types are the chosen benchmark.

Look at the pricing gap between older flats and the newer ones.

No prices for guessing which is which.

When you bring in HDB Clementi Towers for comparison, the data is more skewed.

This despite Clementi Towers being almost a year older.

What conclusions can be drawn for HDBs in general, and in particular, Clementi HDBs?

If age was the only consideration, Casa Clementi should be selling higher than Clementi Towers.

But in reality, the comparison isn’t even close.

Location is always a major factor in the buyer’s consideration.

Even looking just at old flats within a 500m radius around Clementi MRT station, as below: 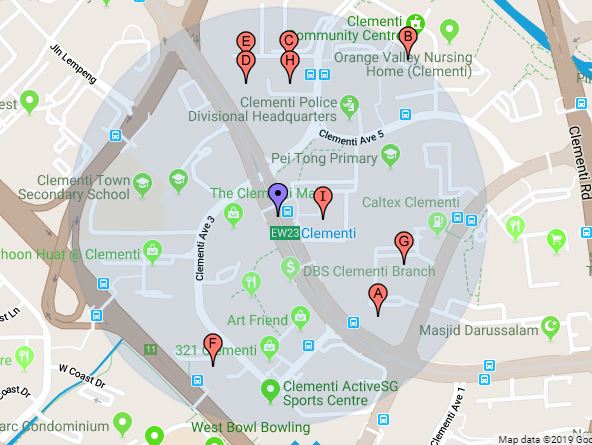 The most expensive transaction (psf) belonged to I.

And all the flats are within 3 years of each other!

Private or HDB, the needs and wants of resale buyers are very different from those who buy new.

Because as our economy and population grew, our housing output did not.

As most of the growth during those times were in new towns in the north-east or far west, more mature estates were deprived of much needed rejuvenation.

No wonder housing was such a hot topic during the 2011 general election where the final results saw a 6.46% swing against the PAP from the 2006 elections to 60.14%, its lowest since independence.

Consequently, there is a huge gap between the old and new HDBs in Clementi.

And through my research have found that it applies to other HDB towns as well.

Which leads to my 3rd point, and bold prediction.

A few clusters of new HDBs in Clementi are going to reach their 5-year MOP over the next few years.

They include Clementi Cascadia, Clementi Ridges, and the DBSS Trivelis.

According to data from 99.co, Clementi Cascadia and Clementi Ridges have transactions above S$8,000 psm, and Trivelis’ above S$9,000 psm.

This is just the beginning, and should be the ‘special case’ sales.

When more units enter the market, they will certainly pull up the average transaction pricing for Clementi HDBs.

Above these, the juggernaut would definitely be Clementi Crest.

Slated for completion in early 2020, I predict the development’s 40-storey residential blocks would break new pricing highs among Clementi HDBs once it reaches MOP in 5 years.

It has attributes similar to other high priced flats (such as current record holder City View @ Boon Keng).

Clementi Crest is well located in the heart of Clementi Central, and fully sheltered to Clementi MRT station.

When MOP comes around in 5-6 years’ time, it would be the newest and prettiest kid on the block.

Prices will be lifted, and maintained as batch by batch of new HDBs come into the resale market.

Overall, the supply is well timed, and will not lead to an avalanche of new units in the market.

On the flip side, what lies ahead for the older flats?

I feel that there is a bottom, and come a certain point, it’s not realistic to expect it to go further down.

Finally, how much should you be paying for your Clementi HDB?

2 years back when HDB leases was top of the news, there was an opinion article who wrote about a method: using price per square foot, over the number of years remaining.

For example, the latest record at Boon Keng was for a 119sqm 5-room flat with 91 years remaining.

Refer to the original article here.

Let’s put this to the test for old and new 4-room Clementi HDBs. Excepting the most prime located (Clementi Towers).

Not that far apart isn’t it?

At least when compared to the record priced flat.

Accounting for differences in specifics like facing, renovation, etc., it is a reasonable difference for flats in the same town.

Are you avoiding older HDB flats simply because of their age?

Is it worth to pay more for a newer flat when it averages out to be fairly priced in relation to older flats?

There are many things to consider when buying a house.

What do you think of my article? Send me a message and let me know 🙂

My name is Jim Tay and I’m a Property Consultant who specialises in long term retirement planning and investments.

It’s important to get the right advice and plan properly for your Real Estate. After all, it is likely to be the largest asset in our lives.

If you want to leverage on your home as a platform for comfortable retirement, click here to learn about my Property Retirement Blueprint; a tested and proven strategy to fuel your wealth creation efforts.